Below are 10 of the most common skill errors that I see kids make when they are shot putting. I’d love for you to continue the list in the comments section of this blog.

The shot should sit on the base of the fingers, with three fingers behind the shot and the thumb and little finger to the side, like an ice cream scoop in a cone. Ideally, the shot should not touch the palm. 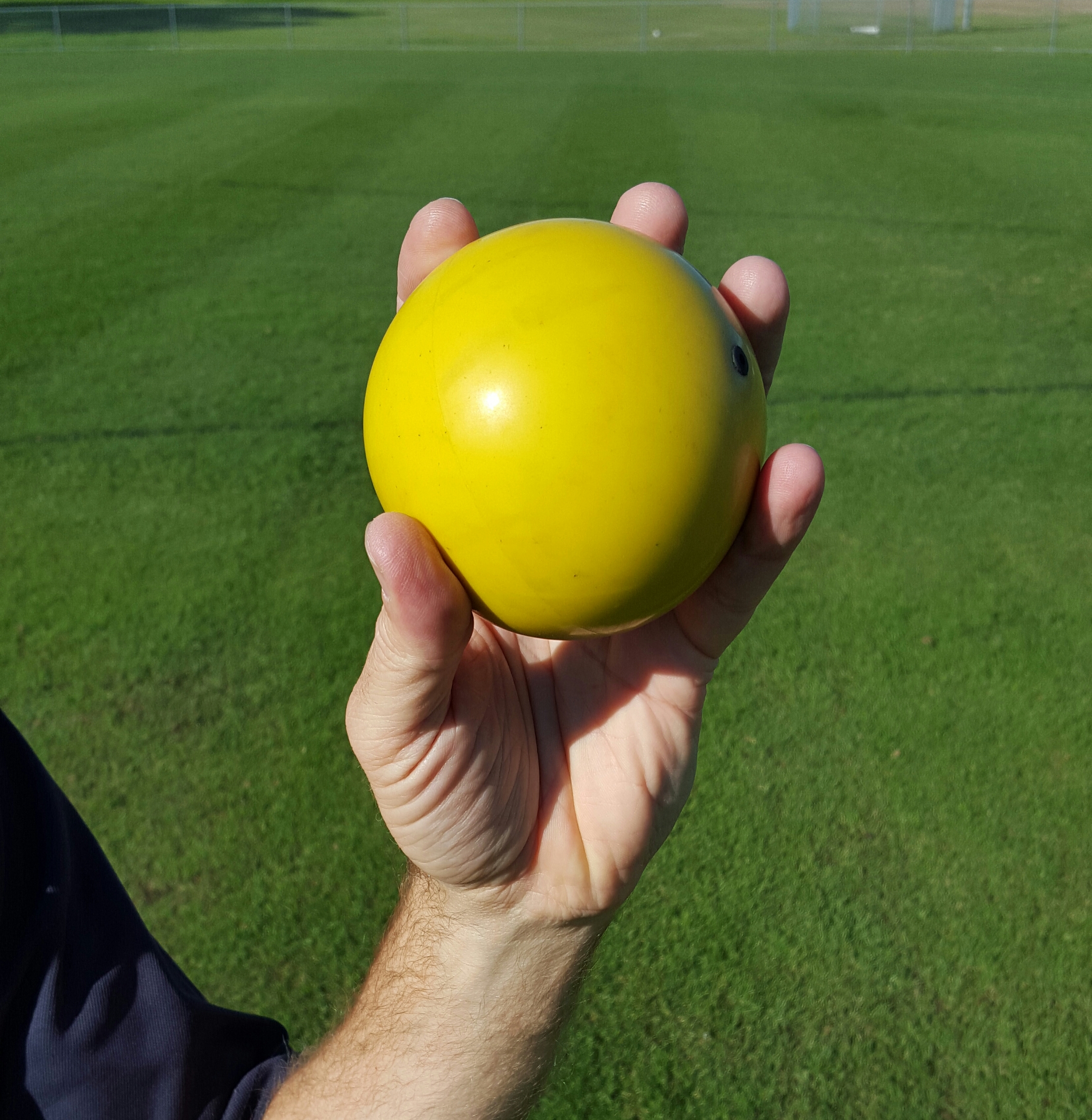 Many young athletes, however, sit the shot on the palm, which means that they will not be able to propel the shot off their fingers when they release it.

Shot sitting on the palm

At the other extreme, some youngsters try hold the shot in their fingertips, making it very difficult to grip and control the implement.

Shot held in the finger tips

It is also common for young athletes to tuck one or more fingers under the shot. This makes it very difficult to effectively propel the shot off the fingers on release. There is also the risk of the shot slipping out of the hand.

Fingers tucked under the shot

It is very common for young athletes to incorrectly place their hand under the shot when it is against their neck, with their palm pointing up “towards the sky”.

This is often because the athlete is afraid that they will drop the shot.

Hand under the shot

The hand should be behind, not under the shot. The palm needs to face forward. This allows the shot to be more effectively pushed away from the neck.

Instruct the athletes that they need to hold the shot with their “elbow up, thumb down and palm out”. You can also ask them to point their little finger to their ear lobe and their thumb to their collar bone in an attempt to turn the palm forward.

3. A gap between the shot and the neck

Many novice shot putters mimic an overarm throwing action by holding or withdrawing the shot back away from their neck. This, of course, is against the rules.

A gap between the neck & the shot

The “IAAF Competition Rules” states that prior to commencing a put: ” . . .the shot shall touch or be in close proximity to the neck or the chin . . .”

I believe that it is best to teach young athletes to touch the shout against their neck. I tell them to “lock” or “squash” or “glue” the shot next to their “windpipe”, under their jaw and in front of their ear.

Other errors that young athletes make when positioning the shot include holding it:

Some young athletes will drop their elbow or tuck it into their side prior to or during the putting movement. 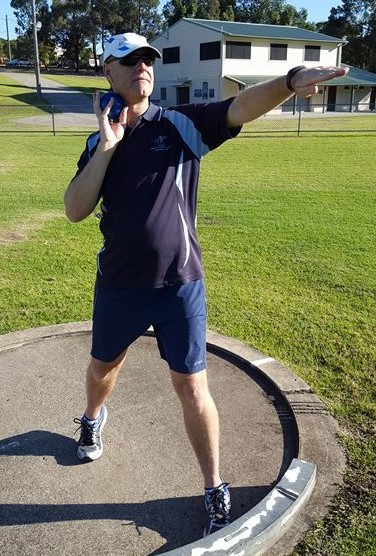 This causes their throwing arm elbow to point down and their thumb to point up – a position from which it is very difficult to effectively push the shot. It can also result in a throwing action rather than a push. Instruct the athletes to:

I find the shot put slam drill very effective in teaching the athletes to keep their elbow away from their body.

5. The elbow leading the shot

Similar to above, this occurs when the athlete allows the elbow to get in front of the shot during the putting action.

Elbow in front of the shot

This is usually caused by the athlete’s confusion between a shot putting action and an overarm throwing action. The elbow leading the shot leads to many problems including:

Simply instructing the athletes to keep their elbow up and behind the shot can be an effective remedy to this issue. Again, the shot put slam drill can also help the learning process.

Experienced shot putters throw with their whole body, utilizing the muscles in their legs and torso as well as their arms and shoulders. Beginners commonly throw with their arm only. Watch out for the athletes who start in a side-on preparatory stance and leave their feet fixed to the ground throughout the movement. Their hips will remain in virtually the same position as they awkwardly attempt to throw the shot around and across their body. 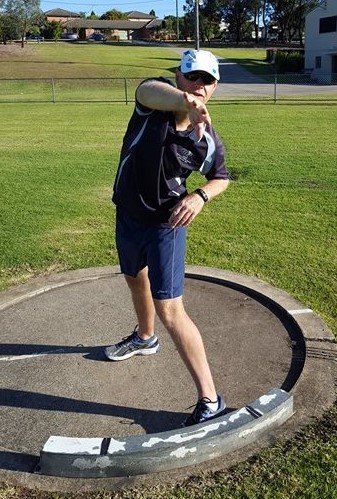 Watch for athletes who, when putting the shot, tip over (“like a teapot”) to their non-throwing side or bend forward from the hips “looking for ants on the ground”. This results in a low delivery position and therefore a low release of the shot.

Tipping to the side

Teach a tall finishing position, with the chin “as far away from the ground” as the athlete can get it.

8. Throwing their arm away

Many young athletes fling their non-throwing arm away behind them as they deliver the shot. This results in the athlete over-rotating, losing balance and unable to effectively “block” or “brace” their left side (for a right-handed thrower). 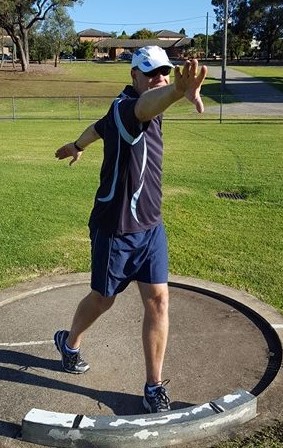 Ideally a right-handed thrower should sweep their left arm around as they they turn to the front but once the left arm reaches the left-hand-side sector line, it should be pulled in towards the body to assist in a blocking action.

Watch for athletes who turn their hand as they release the shot and finish in a position as if they are making a “stop” gesture, with their thumb and fingers pointing upwards.

Cue the athlete to keep their elbow up and finish with their throwing hand in a “thumb-down” position.

The shot put slam drill is very good for teaching a the correct way to propel the shot off the fingers.

Ideally an athlete should extend or “snap” their wrist to “flick” the shot off the fingers as it leaves the hand. Most beginners do not do this. They will most likely leave their hand and wrist in a neutral position as they release the shot. The athlete will simply “let go” of the shot, providing no additional propulsion off the fingers. 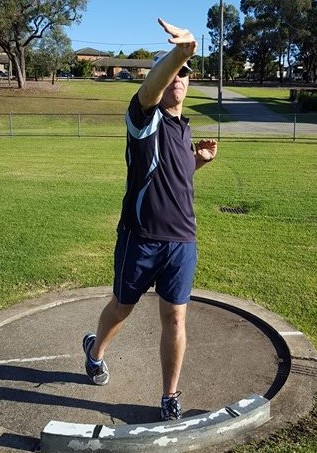 Good flick off the fingers 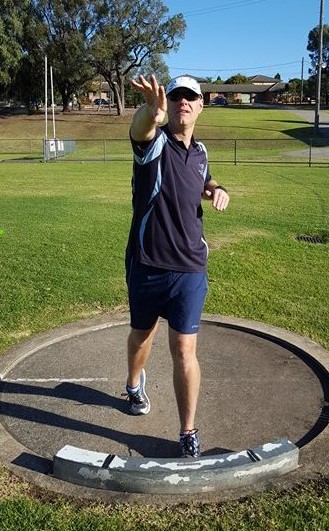 No flick off the fingers

Use the shot put slam drill to teach athletes how to propel the shot off their fingers.

What common technical mistakes do you see young athletes make when they are shot putting?

You can add to the above list by clicking on “Leave a Comment” located on the left sidebar or by scrolling down to the “Leave a Reply” box below. I would also love to hear if you have any solutions other than those noted to any of the common mistakes identified.

5 Posts That Will Help You Teach Shot Put