Where To Start With Complete Beginners In The Discus

The Best Place To Start With Young Discus Throwers

One of the biggest limiting factors for novice discus throwers is the ability to confidently hold, control and release the discus.

Commonly, these skills are either taught poorly or not at all.

When coaching, I often inherit kids who have been trying to throw the discus – sometimes for years – with a grip and release that is holding them back.

The discus should ideally spin off the index finger and rotate out of the front of the hand when released.

Many young athletes release the discus out of the back of the hand or allow the discus to tumble out over their fingertips.

Where to Start With the Discus

Holding, controlling and releasing the discus is the place to start with young discus throwers.

This is always where I begin.

Ideally, when holding the discus, a young athlete should:

The discus “rests'” in the hand. It shouldn’t be fiercely gripped.

Once the kids are familiar with the grip, ask them to stand and hold the discus with their:

From here, ask the kids to perform a few gentle maneuvers while attempting to control the discus. I usually start with some gentle forwards and backwards swings, reminding the kids to keep their arm long and relaxed.

More complicated moves of greater magnitude can be progressed to if deemed safe and appropriate by the instructor.

Drawing a “figure 8” with discus in front of the body while maintaining the correct grip (no thumb over the edge!) and keeping the hand over the top of the discus is a more advanced challenge.

NOTE: For safety reasons I initially prefer to use a modified soft plastic discus. I always set up the activity to ensure that there is no possibility of a discus being inadvertently released towards another close-by athlete or bystander.

The “Discus Waterfall” is my favourite challenge to use when first teaching young athletes how to release a discus from their hand.

The athlete stands with feet parallel, holding the discus vertically in front of them, using the correct grip.

Tipping their hand slightly forward, the athlete lets the discus roll over their index finger and drop from their hand “like water going over the edge of a waterfall”.

The discus should land on its edge just in front of the athlete’s feet. The athlete picks up the discus and repeats. 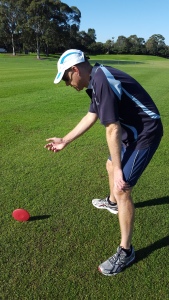 I suggest a variety of games and challenges that involve rolling and underarm tossing a discus to a target or a “goal”. Keep an eye on the athletes’ grip and ensure that the discus is being released out of the front of the hand.

To give kids a chance at having some success with the discus, first help them to become proficient at handling and releasing this discus. Teach them to:

Would you use this activity as your discus starting point?

What are your thoughts on this as a discus starting point? Let me know by leaving a comment/reply or by using the contact details below.

How to Teach Discus to Young Athletes

Where To Start With Complete Beginners In The Shot Put