A Fun Game for Shot Put, Discus Or Javelin Coaching

I recently discovered this very simple game while coaching discus to a group of 8 and 9 year-olds.

As well as using discuses, the game could be played with other athletics implements including modified shots and javelins, and also adapted for use in other sports.

Divide the kids into pairs or small groups of no more than 4 athletes.

For each pair/group, set up a target area like the one pictured below using hoops or similar. 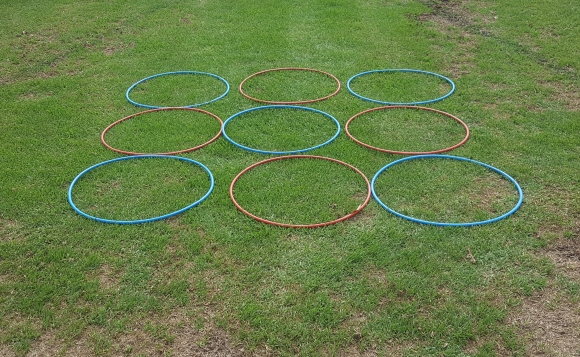 Stand the kids behind ground markers a suitable distance away from the targets. The distance will depend on the implements being used and the age and ability of the athletes. (I had my group standing about ten metres back).

NOTE: For safety reasons the groups must be spaced a suitable distance from each other.

Each child takes turns at throwing their implement at their target area in an attempt to land it on the full in one of the hoops. (When I first used this game, the kids were being taught the correct discus release using an underarm toss).

If an implement lands in one of the hoops on the full, a marker such as a ground dot or cone is placed in this hoop. The implement only has to touch down in the hoop, not come to rest inside it, to count as a successful attempt.

The aim of the game is to end up with a marker in every hoop, or in as many hoops as possible in the given time.

NOTE: For safety reasons the athletes should not throw or collect their implement until given a signal by the coach.

Why The Kids Loved This Game

This task was more challenging and took longer than I expected. The game actually gets harder the more targets that the kids hit, as a hit target is essentially removed from the game. But the kids did not want to stop! It became addictive and really engaged the athletes.

NOTE: Watch the great exasperation that results when one of the kids hits a target that already has a marker in it!

The kids had the chance to cooperate as a team in a fun competition with other teams.

Why I loved this game

The game allowed a skill to be rehearsed multiple times in a fun environment. I certainly saw leaning and improvement occur.

The kids were challenged, and had to show a good lot of determination and persistence.

The athletes got to work with and support other athletes in trying to achieve a common goal.

Try out this game with a group of athletes. Experiment with your own variations. I would love to hear how it goes,

What are your favourite throwing games? Let me know by leaving a reply/comment or by using the contact details below.

How to Teach Discus to Young Athletes