High Jump: What is The Best Reminder of Which Foot To Use?

How to Best Cue the Correct High Jump Take-Off Foot

When beginners first attempt a scissors high jump, it is not uncommon for them to use the “wrong” take-off foot. I’ve developed a really simple “fix” to this problem, which is outlined below.

Which Foot Should They Take Off From In High Jump?

When attempting a scissors high jump, the leg closest to the bar is driven up and over the bar first.

If running in from the left side of the bar, the left leg is driven up first, making the right foot the take-off foot.

Therefore, if running in from the right side of the bar, the right leg is driven up on take-off, meaning the left foot will be the take-off foot. 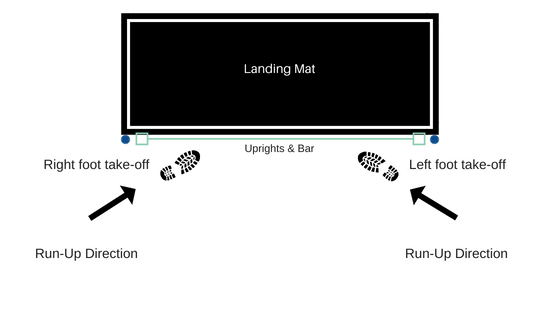 Kids will often do the opposite to what is described above. It is common for beginners to try to swing their outside leg over the bar first. This means that they will take off from the foot closest to the bar, causing them to “roll” over, rather than leap scissor-like over the bar.

How to Fix a “Wrong” Foot High Jump Take Off

The first and most obvious step is the ask the athlete to try to run in from the other side of the bar. The thought is that they have initially been running in from the “wrong” side for their preferred take-off foot. This change will work in some cases, but not in all. Some kids will change sides but then swap their take-off foot so that they are still taking off from the foot closest to the bar and still swinging their outside leg over first.

The Power of a Piece of Coloured Tape

The next step is to teach the kids how to take off from the leg furthest from the bar.

To do this I simply:

The focus is on the tape, rather than having to remember which foot to use.

NOTE: I haven’t yet used this method for the flop technique, but assume the principles would work the same. I could also see it working with those kids who attempt to take off from two feet – which the rules do not allow.

As a coach or sports parent involved in athletics, carry a piece of coloured tape around with you. Use it help cue kids to use the correct take off foot for scissors high jump. Let me know if it works!

An Awesome Visual Cue to Help with Safe High Jumping