3 Coaching Points That Will Make Kids Better At Javelin

1. Get The Grip Right

Regardless of the grip being used, teach young athletes that the javelin should be held:

I prefer teaching the grip that sees one finger and the thumb behind the binding.

A “One Finger” Javelin Grip

Error 1: The javelin being held across the palm

Holding the javelin in a fist makes it difficult to align the implement in the direction of the throw. 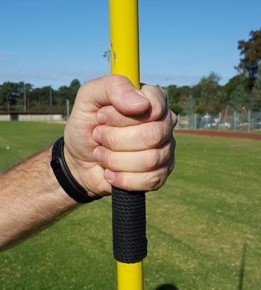 Error 2: The javelin being held in the fingertips

This will make it very hard to control the implement.

Error 3: The javelin being held too far down the grip.

This may cause the fingers and thumb may slip on the grip during delivery. It will also be more difficult to impart a force on the javelin. 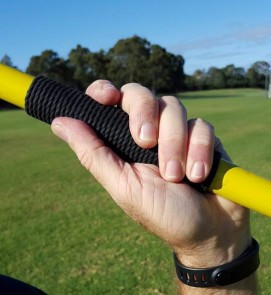 No finger behind the binding

Hold the javelin firmly along the palm with at least one finger behind the binding.

2. Keep The Tip Close To Your Eye

To get the best result, the javelin tip should be aimed in the direction that the athlete wants the javelin to travel.

A really good cue that can be used to describe the position and alignment of the arm, hand and javelin just prior to delivery is: “Elbow high, palm to the sky, keep the tip close to your eye”

Elbow high, palm to the sky, keep the tip close to your eye

Prior to the throw, many young athletes lose control of the point of the javelin, either lifting the tip too high or swinging it out to one side.

Error 1: The tip pointed too high

This can result in the javelin:

“Elbow high, palm to the sky, keep the tip close to your eye”

Error 2: The tip pointed out to the side

A javelin pointed too far out to the right (for a right-handed thrower) can result in: 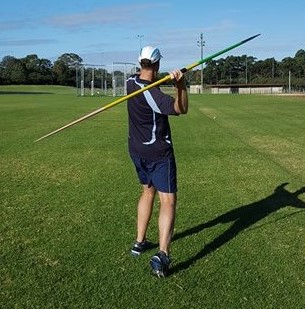 Javelin tip out to the side

Kids need to be taught to “pull” not “push” a javelin.

From the extended position behind the shoulder, once the throwing arm action begins, there should be one long pull on the javelin in a continuous flowing movement.

One of the biggest limiting factors in novice javelin throwers is the inability of kids to throw fluently from a position in which the javelin starts extended behind their shoulder. 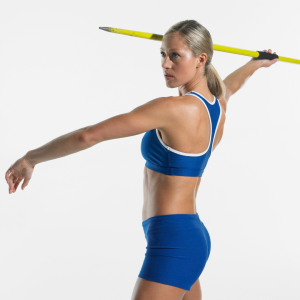 Photo by DAPA Images via Canva

Many kids firstly shift their throwing hand up next to their shoulder and then “push” the javelin. The throw becomes a stop-start push. A double movement occurs during the throwing action. This may cause the javelin to float through the air without any rotation around its axis and then drop to the ground.

Use one long pull on the javelin.

The next time you get the chance to teach or coach javelin, try focusing on one of the three coaching points highlighted above. I would love to hear how it goes and what effect it has. Let me know by leaving a comment/reply or by using the contact details below.

How To Introduce Javelin To Young Athletes (plus bonus cheat sheet)