Where To Start With Complete Beginners In The Shot Put

The Best Place To Start With Young Shot Putters

You are given the job of helping absolute beginners learn the shot put.

Where would you start? What is the very first thing you would do?

In this situation, you would need to think about what will:

Check out below to see what I would do.

I would love your feedback about what I have chosen.

Where to Start With the Shot Put

Shot putting is considered a pushing action. So before becoming proficient at shot put, a child needs to learn how to effectively push an object. Trying to teach the shot put prior to the child having developed a basic pushing action –  that finishes with an acceleration of the object off the fingers – is putting the cart before the horse.

Trying to teach the shot put prior to the child having developed a basic pushing action is putting the cart before the horse.

An effective push involves the full extension of the arms, wrists and fingers, with as much of the body as possible kept behind the implement. This includes the elbows, which need to be kept up to side, away from the body. A push is doomed as soon as the elbows drop and get in front of the hands, which is a common fault in novice shot putters.

Full extension of the arms, wrists and fingers

Two-Handed Push From Chest To A Target

Start by teaching kids to push a ball or modified shot from in front of their chest to a target.

Why two-handed? If they can’t do it effectively with two hands they certainly won’t be able to do it with one.

Place a target, such as a hoop, at an appropriate distance from the throwers. The distance of the hoop from the thrower will depend on the age of the athletes and the implement being used. I like the idea of using a target to emphasise accuracy. It usually results in a tidier technique. It also dresses up the activity into a bit of a game.

Standing front-on to the target, with feet parallel, the athletes attempt to land the shot on the full in the target, using a strong two-handed push from the chest.

Instruct the kids to: 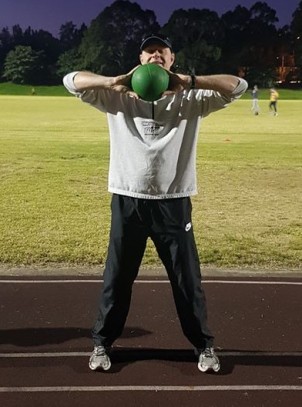 Elbows up, thumbs down, palms out

Push a variety of balls over various distances and heights.

Push from a variety of starting positions: standing with feet in various positions, kneeling and sitting.

Create a series of activities, games and challenges that use a two-handed pushing action.

Work on hitting that sweet spot of challenge in which the kids are really engaged. Allow the kids to pick the distance and size of the target.

To give kids a chance at having some success with the shot put, first help them to become proficient at a fundamental pushing action where they:

The best place to start  is the two-handed chest push.

Would you use this activity as your shot put starting point?

What are your thoughts of this as a shot put starting point? Let me know by leaving a comment/reply or by using the contact details below.

Where To Start With Complete Beginners In The Discus